The Running Industry Diversity Coalition is working to create more space for Black, Indigenous, and people of color (BIPOC) in our sport.

What is the Running Industry Diversity Coalition?

In October 2020, the Running Industry Diversity Coalition (RIDC) was formed to address systemic racism in the running industry. Funded by grants from Brooks and HOKA ONE ONE, the RIDC aims to unite the running industry to provide resources, measure progress, and hold the industry accountable to equitable employment, leadership, and ownership positions. The coalition is working to improve inclusion, visibility, and access for Black, Indigenous, and people of color.

The RIDC envisions a running industry committed to racial justice where Black, Indigenous, and people of color are welcomed, valued, and amplified.

Watch below as the coalition’s co-chairs, Alison Mariella Désir and Chris Lampen-Crowell discuss the founding of the RIDC, the challenges of its early days, its intentionally diverse board, and their hopes for the future of running. 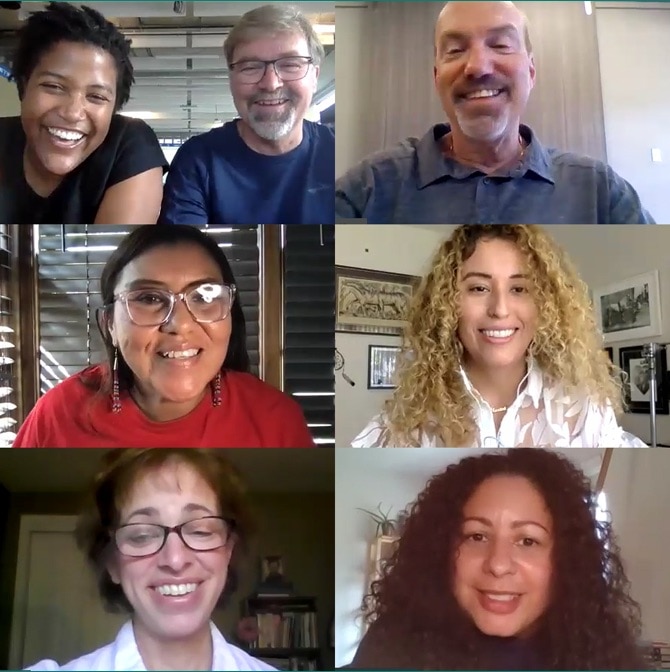 A year in action

A couple of key connections helped the coalition come together. When the idea was in its infancy, John Benedict, co-owner of Playmakers and current board RIDC member, reached out to Teresa Baker, a well-known advocate and diversity leader in the outdoor industry. As the founder of the Outdoor CEO Diversity Pledge, which connects leading outdoor brands with inclusion advocates to advance representation for people of color across the industry, Teresa was a natural choice for some sound advice.

“John said to me ‘We’re thinking about creating a new pledge for the running industry,’ and I told him please — we don’t need another pledge. How about you call it a coalition. He gave me a rundown of what they wanted to do, and I connected them to Alison. It took off from there. The RIDC is where it is today because so many amazing people said yes to coming together to create this coalition,” Teresa said.

BIPOC employment in the running industry will match national demographics, including racial equity in roles across organizations, from entry-level to management and C-suite positions.

BIPOC ownership and leadership of running industry companies, events, and stores will match national demographics and we will place a particular focus on running stores which serve as key community interfaces with the culture of running.

The running industry will hire and contract with an increased share of BIPOC-owned suppliers, vendors, and contractors.

Through intentional work to expand access and inclusion, the running industry will see an increase in participation among the BIPOC community in races, running clubs, and training programs to match national demographics.

100% of BIPOC runners will report feeling welcome, included, and safe at running stores, clubs, and events.

The running industry will assume responsibility for an increase in authentic BIPOC representation in media and marketing.

To support these goals, the RIDC offers workshops, hosts events with community and brand partners, curates diversity resources, and more.

During her time as an advisor on the RIDC’s board from its inception in October 2020 through June 2021, Teresa encouraged the group to remain true to its values.

“It’s easy to move away from your core once things get going. But staying focused on why they came together in the first place was vital to this coalition’s success. Sure, there’s work to be done beyond the running industry. We shouldn’t think that once we fix this industry — and we will fix it — that all will be right in the world.”

The RIDC’s work is just one small component that goes into racial justice and the dismantling of white supremacy. But having the opportunity to focus on the running industry now, in this moment, could be a steppingstone to lasting social change outside of running.

The RIDC and Brooks

According to Shannon Woods, Senior Manager of Diversity, Equity, and Inclusion at Brooks and RIDC board member, there were three key aspects that brought Brooks to the RIDC as a founding member: Our running community, our commitment to diversity, equity, and inclusion, and our belief in the power of the run.

“Brooks is known in the running industry for our exceptional relationships with retailers through our sales and customer service teams. We are really proud of the relationships we have built over many years, and our bonds with Specialty Running Retailers is how we received the invitation to join the RIDC coalition as a founding partner. Once we were at the RIDC table, it was apparent that the DEI work that Brooks was engaged in for several years prior to 2020 set a strong foundation for us to move our work beyond the walls of Brooks. And our belief that running can transform a day, a life, and even the world and that running has the potential to be the most inclusive sport in the world aligned well with what the RIDC was looking to achieve,” Shannon said.

Brooks will continue to support the RIDC through a 5-year financial commitment that directly supports the long-term sustainability of the coalition. We will also continue to sit on the board of the RIDC advising on governance and member programming.

One of the biggest strengths of the RIDC is its composition — several of its members are brands that compete for customer dollars in the running and fitness industries.

“The most significant change to Brooks internally after joining the RIDC has been our collaboration with brands who are competitors. This is unique in our industry, and we are working with other running brands sharing our ideas, successes, failures, and supporting each other in this work for the good of the running industry and community,” Shannon explained.

A sense of hope

The 2020 U.S. Census estimates the U.S. population at 42.2% Black, Indigenous, and people of color (BIPOC). Runner data from the Sports & Fitness Industry Association (SFIA) estimates there are 50 million runners in the U.S. and 33.7% of those runners are BIPOC. For the RIDC, success would mean a closure in that gap, an increased sense of belonging by BIPOC in the running community and industry, and a shift in the power dynamics in the industry. Is change possible? Teresa thinks so.

“People like Chris and JB, who had never done this type of work before the RIDC was formed, give me hope. The fact that white men are diving in and moving their fears aside to do this work, that’s promising. That’s powerful. It tells me that a segment of society which has always been present and represented now sees the need to bring underrepresented people into our community and industry. This is difficult work for them, and I remember the hesitancy when we first started. I am proud that they can influence others in the running industry to move forward, step in, and do this work. And this work is not just for people of color. It has to be all of us working on this issue. That’s how we make progress.”

To learn more about the RIDC and how you can participate in its work, visit runningdiversity.com.