Beer and running: A love story

A sweaty run followed by cool suds just might be the most refreshing treat on the planet. That’s why we partnered with Deschutes Brewing — to make the ultimate brewtiful gear: The Run Hoppy Collection.

Once a small brewpub, Deschutes is now a national craft brewery. The brewery originates from the town of Bend, Oregon and is named after the iconic waterway that flows through town. With beautiful trails along the river, leading up their scenic mountain backdrop, Bend serves as a hub for runners.

Deschutes employees share a thirst for the popular sport. It's became a strong part of the team's social fabric, and they've inspired one another to bag some pretty huge feats.

Cean Elliott, Deschutes supply chain manager, had the lofty goal of running a 100-mile race by age 45, but his plan was thwarted by wildfires. Instead, he turned lemons into lemonade — or hops into beer — after a coworker joked he should use their regular 5-mile loop and make it his 100-mile-course. To do so, he would have to run the loop 20 times. Cean laughed off her suggestion, but he realized it had legs.

Cean decided to go for it even though he deemed this his best worst idea ever. He charged the loop, his sights set on 20 laps and 100 miles. Friends and family brought him food, cheered him on, and paced him throughout the entire run.

After 24 hours and 41 minutes, 14,708 feet of elevation gain, and 101.8 miles, over a dozen friends and coworkers were there as he broke through the makeshift toilet paper finish line. The crowd presented him a finisher’s shirt that his daughter customized with his splits and finish time.

His prize package also included a tiara and a belt buckle made from aluminum foil and ramen. It’s safe to say Cean earned himself a beer or three.

Other employees share an impressive list of running accomplishments, from speedy half marathons to crazy 50-milers and summits up Mount Bachelor. Every day, team members meet up to log some afternoon miles. Perhaps it’s the 40-degree keg cooler they all congregate in after their runs that motivates them to keep pushing.

Jennifer Ballard, Deschutes distribution coordinator, says she loves the run community and appreciates sitting down with friends after a good run for a rewarding beer. She notes that the beautiful thing about a beer is you really can’t rush it. You just enjoy it. The same goes for a good run, which could be the reason the two make such a strong pairing.

Now that we’ve got you craving a run and a beer, it’s only fair that we leave you with the top recommendations for a post-run beer from the Deschutes beer wizards themselves:

A special thanks to Deschutes Brewery and their amazing employees: Jennifer Ballard, Scott Hubbs, and Cean Elliott for their contribution to this article. Keep running and drinking. In that order.

Shop the beer-inspired Run Hoppy Collection, and if you’re near Bend, make your way to the tap room for your post-run, ice-cold Run Happy treat — a beer made in collaboration with Deschutes Brewery and Brooks Running. 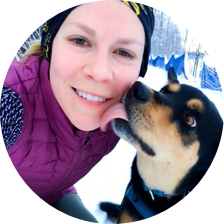 I'm an Alaskan with a passion for a good run with my good dog, Molly. I enjoy the simple things in life like a Taylor Swift bop on my run playlist or a refreshing brew after a hard workout. If I'm not hitting the pavement, I'm probably hitting the trails to find a little R&R somewhere in the mountains.