In a year nearly empty of US road racing, The Marathon Project was practically a Christmas miracle. Held in Chandler, Arizona on Sunday, December 20, the race was the final — and possibly for some runners, the first — opportunity for marathoners to demonstrate their fitness in a tumultuous 2020.

In the face of the COVID-19 pandemic, professional running all but shut down this past spring. Track meet organizers got creative in the summer, putting on small track meets in undisclosed locations with strict COVID safety measures in place. But road races remained largely absent from the scene as race directors struggled with how to adapt traditionally large events to safer, smaller events while still fostering high-quality competition.

Finally in late September, three key figures in the pro running world announced The Marathon Project. Ben Rosario, head coach of the Hoka One One NAZ Elite training group, event director Matt Helbig, and Josh Cox, agent to many top distance runners, came up with the December event as a way to provide an opportunity for pro marathoners to showcase their speed and potentially earn long-delayed income.

Most importantly, the health and safety of participants was the top priority for everyone involved with the event. Athletes were required to show negative results from two COVID-19 tests, taken 24 hours apart, in the week prior. Outside spectators were not allowed on the course, and non-racers at the event were required to wear a mask at all times.

While race logistics were being finalized, race organizers recruited high-caliber athletes capable of throwing down fast times. When race day finally arrived, the racing did not disappoint.

Sara Hall won in a personal best of 2:20:32, for the second-fastest American women’s marathon ever, just under a minute behind Deena Kastor’s American record of 2:19:36 set in 2006. NAZ Elite runner Kellyn Taylor hung with Hall until dropping back just after the halfway point, eventually finishing third in 2:25:22. Keira D’Amato, coming off a stellar year that includes a new women’s 10-mile national record, passed Taylor to finish second with a time of 2:22:56, a 12-minute personal best and fast enough to earn D’Amato the 7th slot in the US women’s all-time list.

In the men’s race, the lead group hung together until about 10k to go, when Martin Hehir pushed the pace and broke up the pack. Hehir went on to win in 2:08:59, with Noah Droddy finishing in 2:09:09 and Colin Bennie rounding out the top three with a time of 2:09:38. Overall, the men’s race was one of the deepest in US history, with seven men dipping under 2:10. From both the men’s and women’s races, twenty total runners achieved Olympic Qualifying standards.

Brooks athletes reflect on the race

Brooks athlete CJ Albertson and Hansons-Brooks athletes Shadrack Biwott and Brendan Gregg were among the men chasing down fast times and podium positions in this memorable race. (Editor’s note: Brooks did not have any sponsored women racing this weekend).

CJ Albertson, who placed 7th at the US Olympic Marathon Trials last February and has spent the pandemic setting national records for both the 50k and treadmill marathon, finished 10th in a time of 2:11:18. “I expected to run faster and be in contention for the win,” Albertson said, “but it was still a PR so I can’t be too upset.” Though the event was devoid of spectators and the usual high energy of big races, Albertson called the Marathon Project, “a great event. [It’s] motivating to see so many people run fast, and great to see the collective efforts of the distance running world come together to create a great opportunity.”

Hansons-Brooks ODP runner Brendan Gregg also praised the event despite falling shy of his goals for the race. “It was not the result I was hoping for, but it was great to see all the competitors come out and run really well.” Gregg, hoping to improve his PR of 2:11:38, finished in 2:13:49. Commenting on the remote location and spectator-free environment, Gregg called it, “a really intimate environment, because everyone on the course has a connection to someone in the race. So all the crowd support felt a lot more personal.”

Shadrack Biwott finished just after Gregg in a time of 2:13:51, which wasn’t far off his personal best of 2:12:01, but may not have reflected his full fitness. When asked about his race via email, Biwott commented, “We were expecting really good results; unfortunately that didn’t happen. [The] marathon is a very strange distance. Sometimes you feel good and you knock it out of the park, and sometimes it knocks you out of the podium.” Biwott is not alone in his assessment of the marathon as a puzzle to be solved. The race’s length amplifies the effect of other factors including fueling and weather, to the effect that executing a perfect marathon, even in perfect conditions, is never guaranteed.

With the ever-shifting landscape of professional road-racing in 2020, runners are looking forward to the opportunities that 2021 may hold. Pro distance runners will have to keep an open mind as they plan and prepare for the coming year, taking advantage of shorter races on the track, or waiting until fall marathons to show off peak fitness.

No matter what, the ingenuity and collaboration shown by the running world this year makes a strong case for continued racing of some kind in 2021. 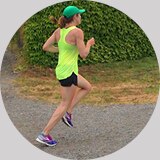 A staff writer and editor at Brooks, Katherine has been an avid runner for nearly 20 years. She’s learned from some the best runners, coaches, and sports scientists in the biz. She has also shown up to many meetings in split shorts.