You are shopping on Brooks Running United Kingdom 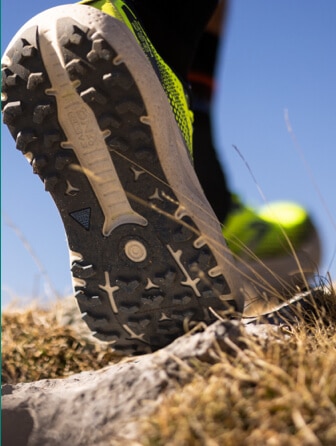 Lugs are the protrusions in the outsole of the shoe that can enhance grip and transitions while running. Designers manipulate the shape of the lugs to specialise a shoe for uphill runs, loose terrain or rocky crags.

The Caldera 6 began its journey two years ago. As the Product Line Manager (PLM), Clinton spent about a year determining a core problem to solve – adding more cushion, creating a more responsive design, finding the best lug geometry, etc. In the following year, Clinton teamed up with footwear developers and designers to outline prototyping, wear testing, and more.

All of this culminates in a deep understanding of the runners who are itching to go further on the trails – an itch that can be scratched in the Caldera 6.

“Trail runners have an emotional response to nature the longer they spend outdoors. They’re constantly looking for that connection”, explains Clinton. “From wild child athletes who are doing ultras to runners doing 50k... we’re focused on keeping the runner connected to nature longer.”

“I worked really closely with the testing team and biomechanics team to make sure that we were hitting all our goals and reaching our target consumers”, explains Brensdal. “We all wanted to create the best Caldera.”

Trails are full of unpredictable terrain, so trail runners need a shoe they can rely on to keep them stable when the going gets rough. This is where the monster truck effect comes in: Brensdal and her team created a shoe with a prominent centre groove that makes the Caldera 6 extremely adaptable and stable, letting runners handle roots and rocks with confidence.

“What’s cool about nitro-infusion is that you don’t actually need to use as much of it to gain a lot of energy return”, says Brensdal. “The big goal was to create a totally new experience, and we hit that on the head.”

Quantifying and interpreting the unique experience of the Caldera 6 lies in the hands of wear test analyst Kerstyn Hall. She gathered and analysed test data collected from a database of roughly 100,000 runners who wear test for Brooks.

“The Caldera 6 was kind of the first time we marketed a shoe as an ultra-trail running shoe, so we looked for wear testers that were doing those types of trail runs or wearing a competitor product”, explains Hall.

“On top of the wear test we met with about ten runners out in Carkeek Park [WA]. We found the most technical terrain we could and had them run in the Caldera 6 – and some competitors and other Brooks products to see how they compared”, describes Hall.

Hall’s surveys found that runners wanted more cushion over longer distances, but still needed responsive energy return. They wanted a locked-in midsole but favoured a wider toe box that allowed for natural foot movement. All of this feedback and more went to the desks of the designers, who used the information to build the final product.

“We had a chance to talk to some of the Brooks-sponsored athletes like Hillary Allen, Mario Mendoza, Jared Bassett and Bryan Bhark to understand their point of view and the new perspective we wanted to give the Caldera 6. It was a great way for me to kind of dive into the trail world with someone who really knows how to build a good shoe and knows the sport”, recalls Garate.

Trail runners are not just stepping on everything they see in front of them — they’re like five steps ahead. For me, it was like they’re robots scanning the trail, reading it so they know where they’re going to step already”, explains Garate.

“It’s all about learning from what we know works and that’s been proven to work and applying it in a different way for a different platform and different consumer”, says Garate.

Sarah has been a competitive runner for over 15 years and brings her passion for running from the track to the keyboard as a copywriter at Brooks. As a running mentor in her home city of Philadelphia, her favourite part of the run is bringing others into the community. Her cat is very passionate about attending virtual meetings and is a huge Josh Kerr fan.